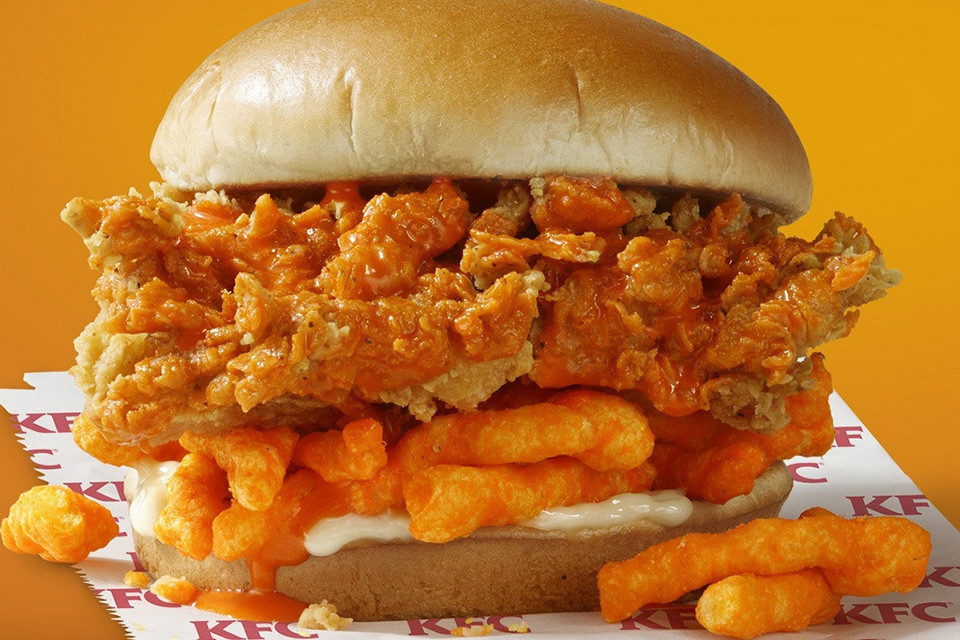 Unfortunately, it is only a limited release at the moment so I had to make me one myself.

I went to Wal Mart (had to pick up some ammunition anyway) and bought some Cheetos (two bags). Then, on my way back, I stopped by KFC to get their legendary chicken sandwich.

I plopped down on the couch to get ready for the Delaware 76ers game and told wifey to CAN IT DON’T EVEN TALK TO ME DURING GAME… TRYING SOME NEW KFC SANDWICH!

Finally some peace and quiet and Cheetos chicken.

I dumped some Cheetos on the chicken patty and took a bite. Wow! Dangerously Cheeto-y! Those KFC boys did it again! Perfect combo of cheese and chicken. The Cheetos themselves provide a nice crunch that’s definitely a little different from what you’ll find in just any regular ol’ sandwich.

I took another bite. Even better.

I took a third bite. Cold spot in the chicken sandwich. Not as good as first two bites, but still pretty good!

Note to self: Next time make sure that KFC chef cooks sandwich all the way through before leaving drive-thru.

Looks like a chicken sandwich with some Cheetos on it, you dummies!

Wifey and I were in bed later that night (76ers won btw) and she said that I “sprayed like a skunk” and to “go sleep on the couch.” I can’t be certain if that came from the Cheetos Chicken Sandwich or not because that does happen on a pretty regular occasion.

Bottom line: definitely buy some Tums before trying this sandwich, or make sure you’re not around any ladies!

Can buy all of the ingredients at Wal Mart.

There was a cold spot.