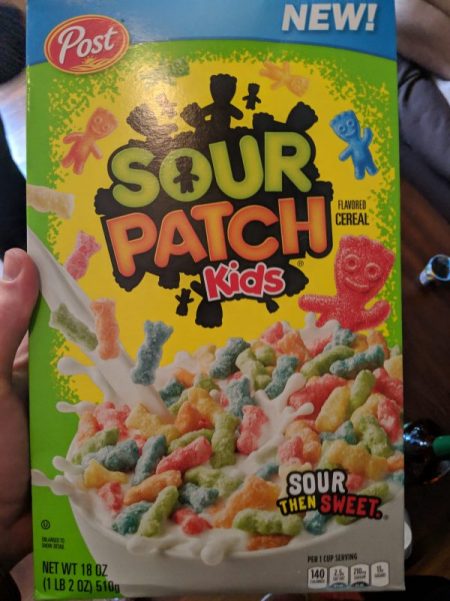 Summary: Potentially ripped my family apart. Caused me to question my relationship to reality while, at the same time, inflicting excruciating and constant Sour Pain.

Just look at them! They look like little devils here to destroy everything you love. My stomach hurts.

My son, Squiggly, saw this new Sour Patch Kids cereal box when I was picking up some frozen pizzas, dogs, and propane from Wal Mart. It seemed like an odd choice for a cereal so, uncertain whether the family would like it, I asked one of the employees whether it’s worth the $5. Randall said it “looked weird” and “he wasn’t sure.” I told my son we would get it another day.

Then my son started squealing.

Wifey wants Squiggly to be on a diet (and I didn’t want to get in fight with Wifey), but I also really didn’t want to listen to Squiggly squeal any more so I bought the dang box of cereal.

I got home to fire up the dogs on the grill and, before I knew it, Squiggly had busted the box open and started chewing. I heard wifey coming down the steps. That’s when I noticed Squiggly’s tears.

I grabbed my son and threw him into the shoe closet before Wifey could make it down the steps.

“My tongue hurts,” my son complained as tears streamed down his face, “I don’t like it.” Before I knew it, though, he had reached into the box to eat another handful.

“What in tarnation?” I thought. I reached for a handful myself.

My mind. Disrupted. Gone. Images of destruction, death, and suffering. Flit, flit, flit. Crunch, crunch, crunch. Pause. More sour death, oh lord. Tears streamed down my face. I wondered if I’d ever be normal again. I held my son tight as we munched and cried.

We continued on like this for years, minutes, or seconds until an angel burst through the closet door. I got on my knees and gestured my son to do the same. The angel opened her mouth.

“What in the living hell, Petey?” the angel inquired.

What? Was hell living? Feeling confused, I grabbed another handful of Sour Patch Kids Cereal.

The angel smacked my face. I realized it was Wifey. My tears and altered state had given her a holy aura. In repentance, I offered up a handful of the cereal.

“Is that seriously Sour Patch cereal?” Angel Wifey asked, “Gross!” She must’ve been overcome by curiosity, though, because she still tried the handful.

There we were, all three of us crying like babies in the shoe closet. It was so sour. It was so cereal. It was so wrong. 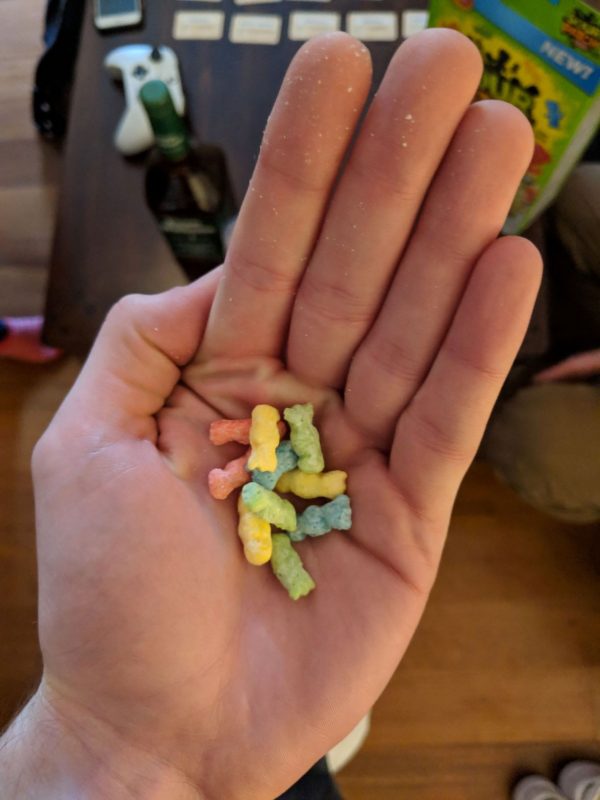 They look exactly like Sour Patch Kids, but they are in cereal form. So wrong. The classic sour powder dust isn’t as prominent as the candy, but it sure makes its presence felt in your mouth.

If you stare long enough, you start to see them for what the really are: little devils. Demons shaped in a dark factory, brought to life by a great machine breathing Sour Dust onto the little rascals.

They are faceless creatures who, if you let them into your home, won’t hesitate to rip your life apart. See you in my nightmares!

Feels like a thunderstorm in your stomach. Or maybe two hurricanes colliding. One handful and you’ll be involuntarily hunched over within seconds, wondering if you’ll ever feel normal again.

Congrats, your stomach is your body’s new epicenter of pain. Prepare for sharp agony to cascade into every limb you haven’t already chopped off in a desperate attempt to distract yourself from the wretched taste. 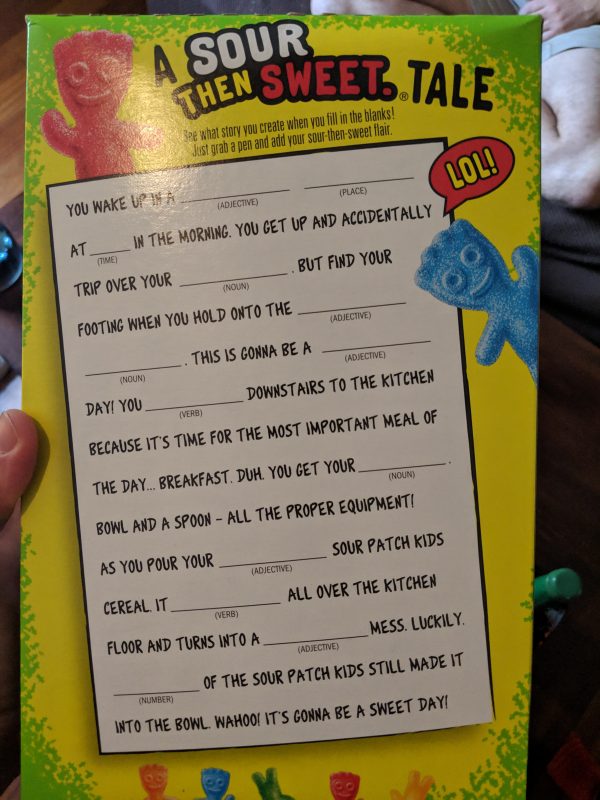 Like any ungodly force, has potential to unite humanity in a fight to preserve everything we love.

Wifey saw me cry for the first time. No longer “feel like man”.

Still buying and eating. Now deeply addicted to the pain.

Not sure if son is OK.