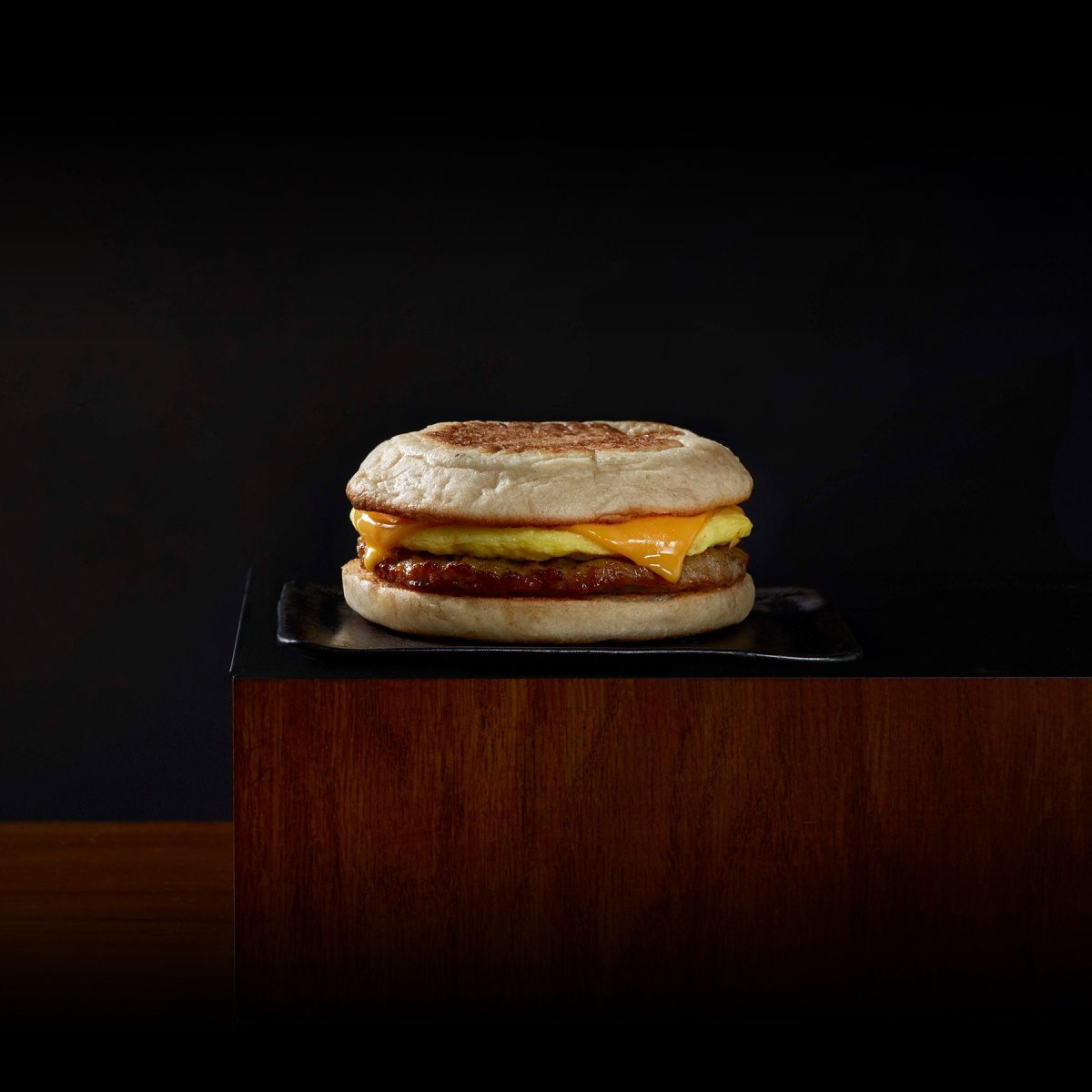 Summary: Eating breakfast is supposed to help you make more money. It’s tough to go wrong with this perfectly circular sandwich that can only be described as MONEY.

Please be warned, though. I did have a rather unfortunate stomach situation at son’s video game tournament after consuming sandwich.

Wifey sent me out to Starbucks to get her some morning “brown magic” before we had to go to our son, Squiggly’s, video game tournament. I recently read an article somewhere that breakfast is the #1 most important meal of the day, and people who eat breakfast have 5-times more earning potential than those who don’t. If you make those breakfasts artisan and gluten-free than you even have 10-times more earning potential! Lord knows wifey would like 10-times more money! Har-har!

Anyway, when I got to the Starbucks, my barista, we’ll call her Jody, had some real attitude. I asked her what the best artisan and organic breakfast was and she said “I don’t know, dude. It’s really all frozen foods.”

Hmph. I said that I’ll just go for the classic breakfast sandwich with sausage, egg, and cheese. Even if it’s not organic then I’ll still be making 5-times more money soon! I also ordered wifey’s favorite brown magic: four pumps of caramel, two pumps of vanilla, and one pump of pumpkin in a Grande dark roast.

While waiting for my sandwich, I wondered if Squiggly would one day get a Starbucks sponsorship. Boy can that boy shoot up some bad guys on that video game. Maybe I should start getting him breakfast sandwiches too.

Once I had received my order, I hopped in my Ford Focus to head home. I unwrapped the breakfast sandwich to eat on the way back.

The bread was nice and crisp and a little oily (just like those green dollar bills headed my way). The egg and cheese were pretty lackluster–nothing special, but they didn’t get in the way (just like my colleagues when I’m going to be making these big bucks). The sausage was the best part–rich, meaty and executed by the Starbucks chef with confidence (just like how I’m going to be now that I’m eating breakfast.

I wonder if I eat five breakfast a day whether I’ll make 25-times more money?? 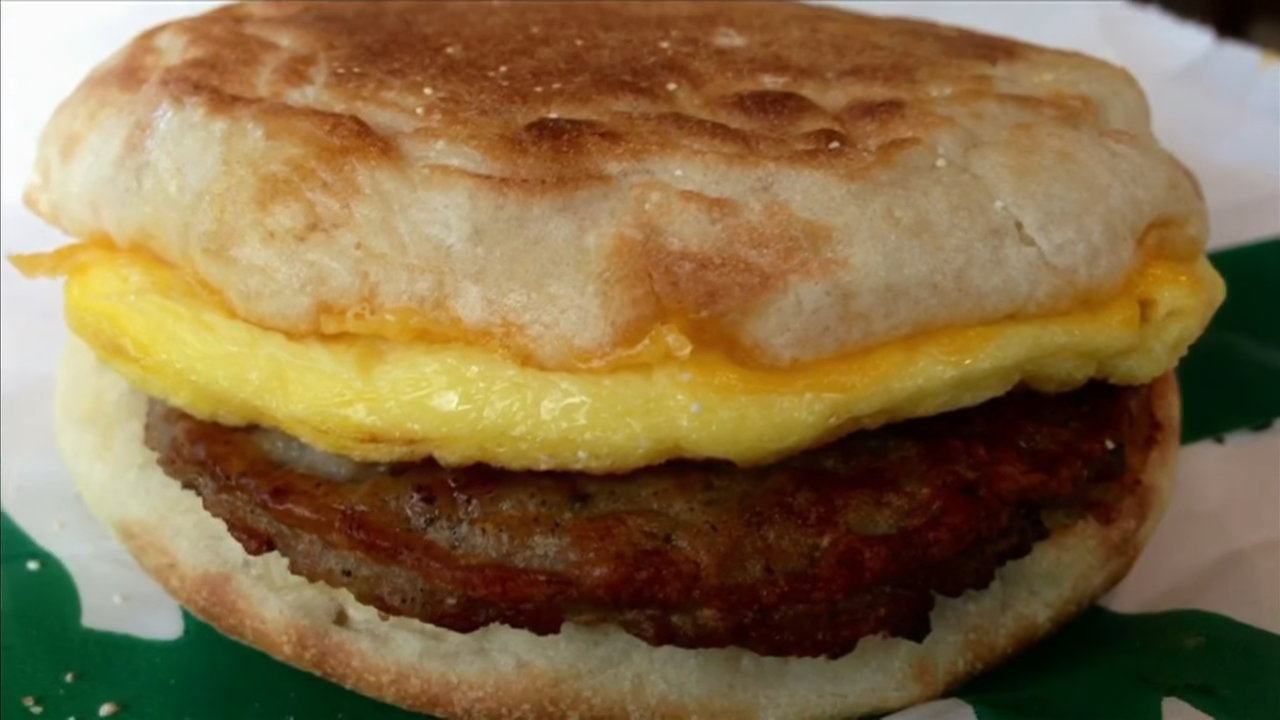 You can really tell that Starbucks puts some thought into how they make their sandwiches. My son, Squiggly, noted how they have a circular shape–what a bright boy! Circle sandwiches are definitely much more appealing than boring old squares. Like they say, it all comes full circle, BABY!

See how the egg glistens in the photo? That’s some high-quality stuff! It’s almost like they cooked that egg up, sprayed it up with some beauty supplies, gave it a fancy massage, shipped it on a plane to the Bahamas, put it in a swimsuit, let it lay in the sun for awhile, gave it a first-class flight back, warmly greeted with a big hug and kiss when it made it back to the store, and put it lovingly in a bag before handing it to me.

Yup. You knew it couldn’t be that perfect.

Maybe it was getting so excited about the money.

Maybe it was trying a sip of wifey’s “Brown Magic”.

Maybe it was getting too worked up over Squiggly’s middling performance in his video game tournament.

I tried to hold it in. I really did. Right after Squiggly’s video game avatar got his head blown off, I shamefully let loose the loudest, smelliest fart of my life. Members of the audience chocked, gagged, and gasped. Their eyes rolled around in the back of their heads in disbelief at the stench. Gahhhhhhhhhh, I said. I was in severe pain. Paralyzed with pain. I couldn’t move, and let loose fart after fart until the entire audience had cleared out of the stands. The only people left were Squiggly and wifey. Squiggly, bless his heart, said “I still love you, Dad.” All I could do was let out a groan, but I let him know later that I love him too.

I really hope it wasn’t the breakfast sandwich that caused me and my family this pain, but it likely was. Minus points on the stomach score.